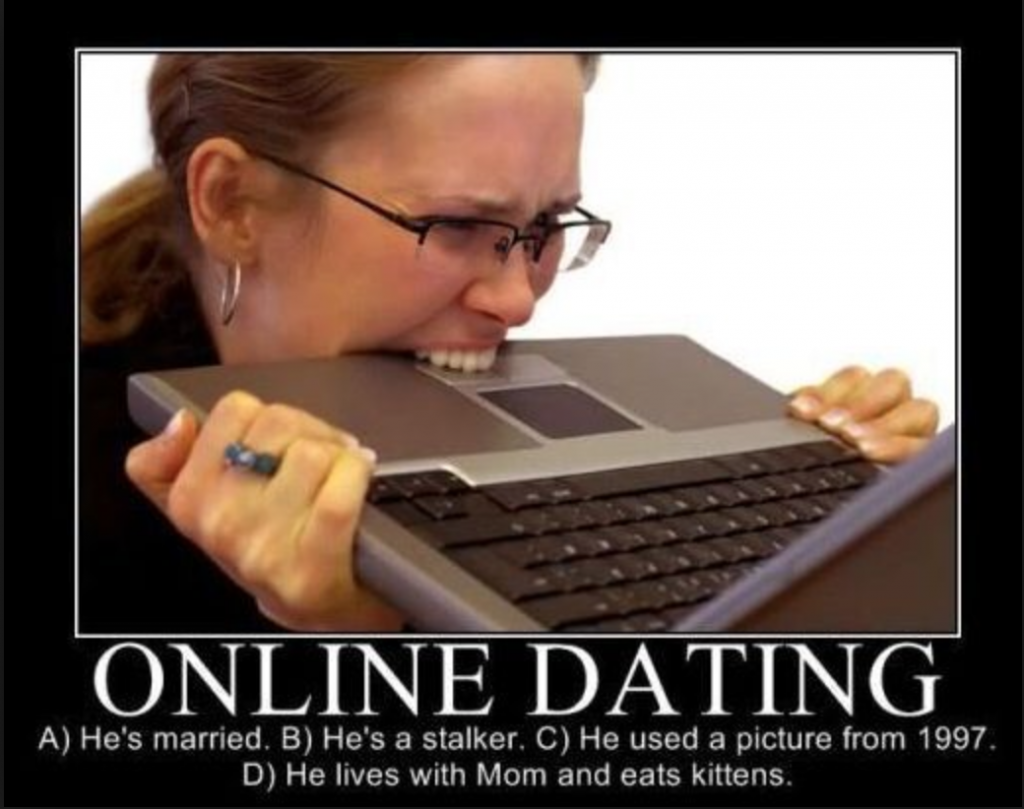 Listening to the travails of two of our single women friends has motivated me to write this column and ask some questions, ponder some societal changes, and simply vent a bit. Since I began dating, way back in the sixties, we’ve seen an unprecedented change in societal mores, habits, sexual habits, family structure, and significant changes in just about every “institution” that existed post WWII.

It’s a different time. We are also currently living in a very scary economic state as well as dealing with pretty serious global issues and I’m NOT talking about “Climate Change.” Terrorists abound worldwide, America’s place in the world pantheon is diminished, and instability seems to rule. I’ve written a two-part essay (Part One and Part Two) about what I believe is really the world’s biggest problem – diminished fertility rates in so many countries – and this issue is getting ZERO attention. So, it’s no surprise that the dating world has changed as well. Without going through a history of my own dating experiences, suffice it to say that I met my (second) wife online. Online dating has gone from stigma to dogma, and true acceptance among all ages and gender. Yes, there’s lots of moaning about its pitfalls but it does work.

Yet, it takes “work” to make it work and that aspect sometimes isn’t fully understood by those who partake. I would – dare I say it – suggest that many women give up on online dating sooner than men. Too many losers, too many liars, too much B.S., and more are examples of what they say. We have two single female friends who have had their ups and (mostly) downs dating. Their ongoing saga of dating and not dating, of having a boyfriend and not, is ammunition for me to endure all the nagging my wife dishes out. I don’t want to go back to the single life. I am obviously ignoring the glaring elephant in the middle of this column – that of diminished interest in marriage and diminished interest in having children across the world. These two women both would like to get married. Both are on the edge of childbearing age so they have both accepted and are fine with that not likely being part of their future family life, though there could be step-kids.

What I learned when I dated – between marriages – is that the cliché that men are set in their ways by a certain age is absolutely equally true for women. Our two friends are VERY set in their ways. What I also have observed is that the one thing any particular guy doesn’t have is the one thing that is NOW the biggest and most important thing on their list of “needs” in a partner. So, if they guy’s too short, then height truly matters. If he doesn’t live in the right neighborhood or too far away, then geographical considerations are paramount. If he’s not funny enough, humor is essential (well, humor IS essential for most women). God forbid he drives the wrong car or wears bad shoes! You get the picture. It’s like when I walk into a room. All I tend to see are the guys with full heads of hair since I’m hair-challenged and that is my particular sore point.

Then there’s the issue of making plans for that first date. Our two friends are VERY particular about exactly where and when they meet. Excuse me? What difference does it make if it’s Starbuck’s or Coffee Bean, a sushi restaurant or Italian food (unless there are real dietary issues). AND, why do these single friends (and other single friends) ALWAYS seem to have to change the time of the meeting? “I’m running a bit late, can we push it back 15 minutes?” Why isn’t a date A DATE? My wife likes to joke that I tricked her. She means that I put on my best behavior while we dated and once we were married, the “real me” showed up. Well, shouldn’t we put on our “best behavior” just as we would at a job interview? I think the pickiness of our two friends shows up immediately and could be a turn-off to a potential date. It would be for me. When I was dating, if it was too hard to simply arrange a coffee meeting, I would give up and not bother.

A therapist friend of mine once said that the number one reason men cheat is NOT what most people would think. It’s not because their wife is no longer attractive or gained weight. It’s because their wives are not sweet and nice. We men are very simple. Be nice to us and we melt in your arms. Be a hard-ass know-it-all demanding woman and we’ll tend to stray or lose interest. This is a harsh reality but it’s the truth. So ladies, lighten up on making plans. Don’t critique the first thing that doesn’t appear perfect (are YOU perfect?), and give the guy a chance to shine. Thoughts, comments?