I remember that Becker car radios were considered among the best!

Continuing with our ongoing blog series on changes in technology and how it’s impacted our lives as well as simply going down memory lane, this edition of The Evolution of Technology looks at car audio; stereos and radios. A car radio is often the only radio most of us listen to! It seems a perfect follow-up to our last column on Top Forty lists (on radio). Professor Weber leads off:

One day in eleventh grade, one of our first classmates to turn sixteen showed us his driver’s license, issued to him only the previous afternoon. He told us that the driver’s license examiner, immediately upon entering the car, snapped on the car radio. “You’re sixteen years old, you’re gonna drive with the car radio on,” the examiner explained, “so I wanna see how you do under realistic driving conditions.”

Yes, car radio systems seldom go unused, by sixteen-year-olds or anyone else! I imagine that at least 90% of the time that I’m in the driver’s seat, something is playing through the speakers.

How car radio has changed during the forty-five years — good grief! — since I (barely!) passed my first driver’s test and walked away with my first driver’s license. Actually, my memories of car radios go back even further. I remember driving with my mother when I was roughly age four and on the car radio hearing “Ivory Tower”…one of the earliest memories I have of popular music. I also remember hearing “Que Sera Sera” in the car one night when my parents and I drove home from dinner at a restaurant. Two other songs I first heard in a vehicle were “Nel blu dipinto di blu” (or, “Volare”) and “Mockingbird Hill.”

In those years (between about 1956 and 1959), the only option for music while driving was an AM radio built into the dashboard. No FM. In the cars of the late fifties, sculptural dials, elegant numerals, chrome housings and the textured fabric protecting the only speaker (no stereo audio in those days) turned the radio into a sort of crown in the middle of the dash. I always liked pushing the buttons — colored a rich ivory in our ’49 Buick, the first family car I remember — designed for changing stations. If my dad had set aside a nickel every time he said, “David, leave the buttons alone, they’re not toys,” he could have retired on the funds that would have accrued. In high school, several friends bought after-market eight-track stereo systems for their “wheels.” The eight-track format did not last too long, replaced in the mid-1970s, if not sooner, by cassette players. Those too could be purchased as after-market systems. In 1977, though, with my college degree under my belt, I bought a Honda Civic with a cassette player pre-installed by the dealership (and probably marked up unconscionably). I owned a couple of hundred vinyl record albums and made dozens of mix tapes to play while I drove up and down Southern California freeways.

Before that, though, as a college student, I owned a 1972 Chevy Vega, one of the few manufactured that functioned pretty well. It came from the manufacturer with FM plus AM capabilities on the radio. A step up in the world, because, other than eight-tracks, all I’d ever known in automobiles was AM radio.

Is it just me being an old codger, or is there something inherently annoying about those cars, usually driven by young men, accessorized with industrial-strength audio systems that pound out thumpa-thumpa music at sound levels you hear only at the airport or in a firefight? When I unluckily end up next to such a vehicle at a stoplight, say, not only his car vibrates, but mine does, too. The greatest advancement, in my opinion, in car audio was building a little USB port into a car. In my 2010 vehicle, it is somewhat inconveniently located in the back of the console between driver and passenger seats. But any inconvenience is compensated for by the pleasure I get from plugging in my iPod and having (at present) almost 4,000 pieces of music available at a touch. I once toyed with subscribing to satellite radio. Many of my friends did in the past several years, but have begun to let those subscriptions lapse. They have found that iPods as well as a variety of radio and radio-like platforms on the Internet (e.g., Pandora, rad.io and others) that they pick up on their tablets gives them more than enough choices for entertainment on the road. I liked several satellite channels, though: two or three of the comedy channels, and various talk and news channels. You can’t really replicate those on all of the platforms or portable music devices I’ve mentioned.

AM radio…eight-tracks…FM radio…cassette and CD players…satellite radio…and now a variety of digital systems: the technology that supplies the soundtrack to a lifetime spent in cars continues to evolve. But one car audio experience hasn’t changed at all, even as it parallels those evolutions in vehicular music. I am referring to the universal joy of singing in the car! On one song you can sing lead, on the next harmony, on a third you can toggle back and forth between both. With luck, you can glimpse a driver near you, oblivious to your presence, shimmy-shaking the upper body and throwing the head back in a yowl you can’t hear, but that James Brown or Mariah Carey must envy. Oh, wait, that’s no driver near me…that’s me seeing myself in my rear view mirror…good grief, I’M that yowler! 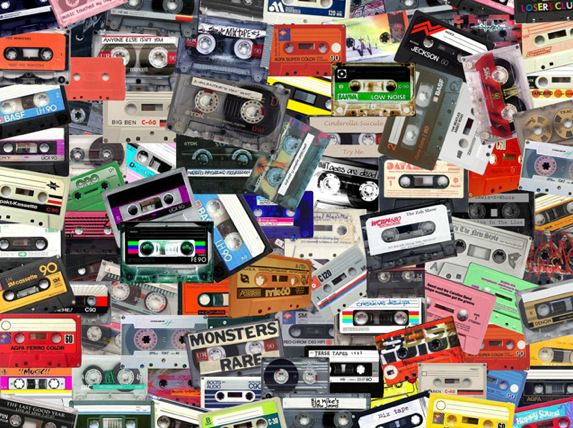 Loved your walk down memory lane, Professor. I can so picture so much of what you described. As often is the case when you go first, I feel you’ve largely covered our topic thoroughly so I’ll have to stretch to add some additional value. I must note that I remember that Chevy Vega well and, in fact, used to tease you mercilessly about it!

For me, car audio meant a great stereo in whatever the current format was. There were specialty shops in Los Angeles – the mecca of cars and car audio in my opinion – seemingly on every corner. In my early days of owning cars, in the 70’s, car manufacturers offered little in the way of significant upgrades in the audio they offered at purchase.

Consequently, I almost always took a new (more often used, in reality) car straight away to one of these car stereo shops. They’d have a bank of speakers on one wall, a bank of players of every kind then available on another, and guys who were the equivalent of the Apple staff brilliant geeks who seemed to know and understand every single aspect of sound in a car. Fortunately for me, I skipped the 8-track phase. They were bulky, not the best system by far, and I didn’t really like it. But, when cassettes came out, I was completely on board. I painstakingly made my own cassettes from my LP collection. It was not easy to do in sharp contrast to the ease with which we can now make audio CDs.

Off-point, I took great pleasure and pride in my dating life to make very special cassettes (and later CDs) for the woman in my life at the time. And, I really did work to make them special and personal for her. I courted my first wife via cassettes I made in which I’d talk a bit, play a song, talk some more, etc. We had met in Los Angeles, but her home was in Paris. Long distance phone calls were still of limited use for most of us, so we continued our courtship via the mail and I made dozens of cassettes in my efforts to woo her back to the States.

But, I guess what stands out for me most – sort of like you, Professor – were those basic push-button AM-only radios in the Chevrolet or Oldsmobile that my parents had at any given time. I even remember going to car shows with my dad and sitting in the new cars and collecting all the brochures and also loving to push the buttons incessantly until my dad would finally tell me to stop.

So, we’ve taken another walk down memory lane which, for the Professor and I, now covers seven decades, beginning in the fifties…Holy Moly!