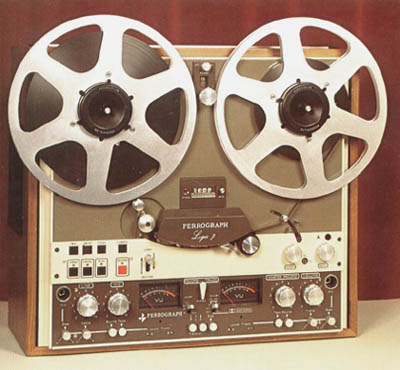 The Evolution of Technology series continues with Audio Tape, co-written by Professor David E. Weber and myself.

Who remembers reel-to-reel tape recorders? How about 8-Track cassettes AND the sound they made when they switched from one to another of the four “tracks?” Regular audiocassettes, remember those? There was a time, when we had vinyl LPs aka record albums and ONLY various forms of audiotape. But, I’m dating myself yet again.

Professor Weber will weigh in with his thoughts later in this column. Speaking of Professor Weber, we had a decades-long tape relationship back in the day when making long distance phone calls was still prohibitively expensive. Our friendship dates back to Nursery School, which was what Pre-School, was called in the Fifties. Our tape relationship continued on into the years after college and early into David’s pre-Professor life, when he left the States to work abroad.

Insomuch as we loved to communicate, we started with lengthy letters to each other. Later, we exchanged audiocassette tapes, the kind that used to be made/sold as another form of purchasing music along with, at that time, only vinyl record albums. I think that was post 8-Track tape years.

I don’t recall whose idea it was, but we began mailing back and forth several of these cassette tapes in which we’d have a portable recorder with us and listen to each other’s tapes. We’d, in essence, have a conversation as we’d listen to something on the received tape, stop it, and then reply on another tape. We got quite good at this form of dialogue but it seems so very primitive looking back at it form today’s high-tech forms of communication. But, I loved it. I looked forward to receiving David’s tape with relish. I recall one time he was traveling in India and he’d taken his tape recorder with him. He was observing some ceremony in which an animal was being killed. On the tape, I could hear the cries of the stricken animal. Since it was only audible, my imagination took over much stronger than had I seen it visually. Ah, imagination. Another forgotten thing it seems at times!

Another aspect of those cassette tapes that I remember so well – again this is pre-Internet and pre-CD – was courting my first wife via music tapes I made her, along with verbal love letters between the songs. I was like a DJ playing songs for her while introducing them and how they made me think of her. How romantic. I will admit those tapes included a lot of Sinatra! Going back further, I had a techie friend in high school who owned a REAL reel-to-reel tape recorder which, in those years, was the ONLY way anyone could record anything themselves. We happened to love a radio show that played on KUSC, the radio station from USC. It was an “Oldies” show, which played old rock and rhythm and blues from the Fifties. This was in the late Sixties – really only a decade or so after this music has first come out, yet it was labeled then, as now, as “Oldies.”

This friend and I kept piles of those shows on reel-to-reel tape. Later, we’d listen to them and devour the songs that we loved from those shows. This same friend and I would shoot baskets in his backyard and play eight ball on his pool table in his garage. Feels like a million years ago!

I also lived through the 8-track fad. And “fad” really seems the right word. They were clunky, made that weird clicking sounds when they switched between tracks, and otherwise were simply a poor so-called “advance” in sound in our cars. Maybe someone has fond memories of 8-tracks, but I think a paragraph from me will suffice. What are your memories of audiotape? Did you make lots of music cassette tapes yourself, carefully timing each track from your turntable? Do you still even have a turntable? Or those old records? I do. For a while, my older son – the rock ‘n’ roller – got into vinyl and “stole” all my old records that he deemed “classic,” such as the first album from The Doors which is indeed a “classic.”

Okay Professor Weber, what are your thoughts and memories of tape?

I have many memories of audiotape. First, it was a relatively new technology when Bruce and I were born in the early 1950s (Note from Bruce: I won’t admit to that!). Tape recording didn’t exist even during World War II. A few years after the war, the most common method of recording sound was still a wire recorder. Imagine not a tape, but a spooled wire, somewhat thinner than a wire coat hanger, and very flexible, running across recording heads; that was a wire recorder. My dad had purchased one of those cutting-edge tape recorders on which he would practice oral presentations or log conversations with clients. The device was a boxy machine about the size of a banker’s box (those heavy cardboard boxes in which one stores files). As soon as I was old enough to talk, Dad and I would make recreational sound recordings. On some, eventually, I would play piano, on others we would sing duets; but when I was younger, Dad would record himself interviewing me—asking, “What’s your favorite ice cream flavor? Who’s your favorite cowboy on TV?” and other important questions. Who knows what happened to those tapes?

I never owned an eight-track system but many of my friends did. At lunch at high school, they would trade eight-track cassettes the way we once, as ten-year-olds, would have traded baseball cards. About a year ago, Charlie, one of my closest friends in high school, emailed several of us to announce that he had purchased a beat-up 1967 Mustang (which back in the day we considered “cherry”) he planned on rebuilding. The car still had its eight-track player in the console. Charlie asked us to send him any eight-track cassettes we may have had sitting around, forgotten. He and I last corresponded over the summer. None of us had been able to come through for him, he reported. I guess eBay would be the first place I would look for eight-tracks. 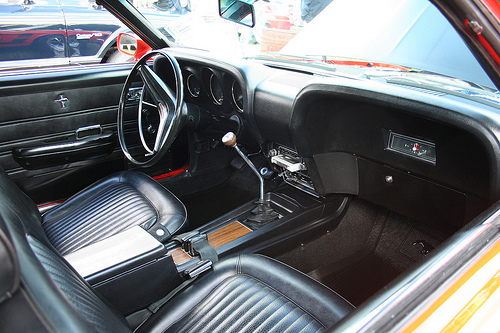 8-Track in a Mustang!

I have many memories of making sound recordings with Bruce. One Saturday in about 1969, he and I and several of his schoolmates (Bruce and I attended different schools) gathered to record music we made. Bruce played the guitar, I played my ukulele, a fellow named Gary played his flute and the other youngbloods played kazoo, beat a bongo drum or simply sang harmony. Our playlist consisted of a few bawdy sea shanties I taught the group, plus a parody, written by Bruce, of The Kingston Trio’s hit, “The Man Who Never Returned.” Bruce would not want me to disclose the lyrics of his composition, so I will only say that it dovetailed nicely with the sea shanties. Oh, we also sang “Good Night, Irene.” We had a lot of laughs, and great fun with overdubbing and so on, but Rolling Stone was not pounding down the door to do a feature article on us!

Yes, Bruce and I corresponded by audiotape for over twenty years. The first several of them, I lived in Indonesia and Japan. I remember taking my hand-held tape recorder—a knock-off of the Sony Walkman—into jungles, forests, markets and buses, or simply onto the streets of Jakarta, Balikpapan, Ipoh, Delhi, Tokyo, Chiang Mai, Koh Samui or Bangkok, talking into the recorder (and getting stares and grins) to share with Bruce my observations, as well as catch him up on developments in my life. Bruce has always been one of the best raconteurs I know, so I always enjoyed his recorded narratives. Most often, he would record while he was driving. Many is the story that would suspend abruptly while Bruce would shout some colorful invective at a clueless driver; then Bruce would calmly resume his commentary where he had left off (Note from Bruce: THAT hasn’t changed a bit as I still do that!). One correction I would like to make to Bruce’s reminiscences is that the ceremony he described took place not in India, but Kathmandu, Nepal, on the holiest day of the Hindu calendar. Annually, goats and water buffalo are ritually slaughtered throughout the country on this particular day. It sounds gruesome but in fact it was very emotional, spookily mystical and culturally authentic. Car after car passed through Kathmandu’s narrow thoroughfares with a goat head, freshly severed, lashed to its grille. Some streets truly were awash in blood. This you could not fully capture on audiotape—so I took many photographs.

Thank you Professor Weber. I so cherish our enduring friendship.