Men vs. Women. So, you’re asking what took me so long to get to this topic for this ongoing series. My answer is simple. It’s too easy. Men and women are different. Yes, I repeat that in every column in this series, but it bears repeating. Perhaps there’s no more stark a difference than in how we approach sexuality and how we practice/act upon our sexual needs and urges. I’ll start off with something that is probably guaranteed to get me accused of being a homophobic, though nothing could be further from the truth. I’m simply stating a fact that the gay community will imputably verify. Homosexual men have many more partners – other men – than both straight men and gay or straight women. And, gay women have fewer partners than heterosexual women. In fact, the actual numbers dramatically underscore the assertion that male sexuality, if unchecked, tends to be much more promiscuous than female sexuality.

Now that you’re sighing, let’s plunge the dagger in further with my usual generalizations and stereotypes which, unlike the fact stated in the previous paragraph, are taken more from this man’s life experiences and observations. My usual disclaimer about generalizations is that they are just that, generalizations –which means they apply much of the time, not all the time. ~~Men can make love to a shoe

Why are there dozens of Playboy-like magazines and virtually nothing similar that women buy? Their vice of choice, as it regards magazines, might be Vogue or Cosmopolitan because women have different interests. When it comes to sex, men are visually stimulated and drawn. And yes, some men could make love to a shoe while most women would just like to buy the right ones.

~~Women actually care if their sexual partner has a brain

Yes, women care what a man has to say, what he does, and how he treats her. Yes, there is the bad-boy thing that some women embrace, but a man can have a “trophy wife” and care little about what’s inside that gorgeous exterior. Henry Kissinger appealed to women; Margaret Thatcher did not appeal to men.

I’ve taught my boys that there are emotional consequences to having sex with a girl. That is because most boys and men can move on to “what’s for dinner” or “I’m thirsty” after making love while most women would like to talk and cuddle. The stereotype of a man not calling a woman the day after love-making isn’t because the man is a dolt, it may simply be that he didn’t attach as much emotion to the love-making encounter.

~~Women often attach lots of emotion to a sexual encounter

Why do women try to delay that first sexual intercourse (meant literally and figuratively)? It is less because they are protecting their virtue or want sex less than the man, but because they know how that sort of intimacy affects them. This is a biological reality. Whatever is released upon sexual relations in a woman is far more powerful than it is in a man.

Yes, it doesn’t say much for the male gender, but it’s only the fear of getting caught, perhaps faith, and the cost of divorce that prevents most men from straying.

A good question to ask yourself is this. Who is your absolute fantasy lover? Pick a movie or sports star, or whomever. If you could have one night with that person, with NO RISK of getting caught or catching any STD, would you do it?

~~When it’s all working, men are much easier to satisfy than women

Again, making men look like simpletons isn’t really hard when it comes to certain things and sex is near the top of that list! Without going “R,” I think most men and women would agree that the biology and mechanics of men are pretty darn simple. Heck, it sticks out there for the world to see or at least it should at the appropriate time.

A woman is much more mysterious. In fact, a man needs to be more caring and focused to please his woman than the reverse. How ironic. Again, this is a mystery but I suspect communication about sex and our individual needs is equally poor between men and women. However, women will at least talk to their girlfriends about “problems” and/or read about them. Most men would rather get water-boarded than admit any shortcomings. The mystery is why both sexes are so reluctant to express themselves since most of the time, those declarations result in more satisfaction for both partners.

The men vs. women blog series is getting more fun to write. I welcome your contrary thoughts, certainly your agreements, and any suggestions for future series topics. 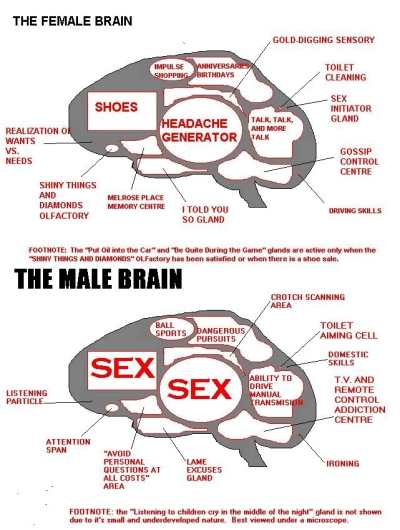