Where and when did it seem that everyone felt entitled? Entitled to an education, happiness, college, a home, every new tech toy, and a new car now and then, etc. I know the answer, as it was an evolution and change in attitude that began in the sixties, in my opinion. Some might say it began with Lyndon Johnson and his “Great Society” and that may also have been a starting point. But, the sad fact is that Americans have a higher quality of life than any generation, anywhere, any time, in world history. Yet, I would assert that the happiness and satisfaction scales are not near as high as the quality of life now available to the vast majority of us, especially our children. Don’t we all know extremely spoiled children? Don’t many of us indulge our children far too much while reminiscing about our own struggles in life? This is not a good change.

Feeling entitled makes a person ungrateful for all that they may have in life. Feeling like the world owes you something only encourages laziness. Getting something for nothing instills nothing good in human beings. And, when it starts in childhood, it can become a very bad lifetime expectation and habit. I tried to offer my kids the balance in life that I thought was appropriate. I got a rude awakening when my older son got accepted to an expensive college and simply expected that he could go and I would pay for it. His younger brother was appalled at the notion that there was even a question that he or his older brother would go to whatever college they wanted to go to!

That reaction from my boys was a harsh wake-up call to this general notion that I fear is quite prevalent among their generation and many older Americans as well. Again, I think this is a lousy development. While I could not fully correct the apparent mistakes I made in spoiling my boys to the degree that they would think they were entitled to go to any college of their choosing, I did make quick amends and adjustments.

As described in an earlier column, My Boys Would Be Better Off If I Abandoned Them, I had learned that because of our relative economic well being, we did not qualify for any financial aid for college. Private loans carried exorbitant interest rates. I chose to give my older son a loan – at the prevailing rate and terms of financial aid – for one year of his college education. 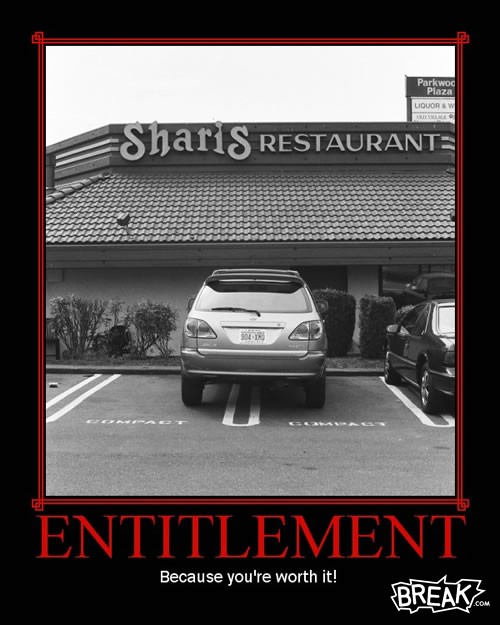 We had a family dinner in which these ideas and expectations of college entitlement were frankly discussed. My younger son, at first, expressed outrage that he might have to carry one-year’s worth of college debt. My older son quickly got the reasoning behind his loan. He was now invested in his education and it wasn’t going to be just a fun lark for four years.

While I tend to avoid politics, there is no question that the evolution of entitlements, across the spectrum of society, has created an expectation that these gifts would go on forever. We can see the damage this thinking has wrought in Europe. We can see it at home, where so many cities and states are in fiscal crisis. This mind-set must change. It is changing in my home. I am teaching by teenage boys more about money all the time. They already do chores for allowance and get docked if those chores are not done. Included in their allowances is an annual clothes budget so they are now buying their own clothes with what seems to be their own money. Amazing how Target all of a sudden became a store of choice!

Their entertainment expenses – except when we go out as a family – also come out of their monthly allowances, as do any other purchases. My DVD-obsessed younger son now waits for a DVD to go on sale rather than expect to get it the day it’s released. Delayed gratification is something that should be taught almost literally from the day a child understands money and can count. I know my justification for spoiling my boys had a lot to do with my feelings that they had been hurt so badly by my divorce and their mother abandoning them. I felt overwhelmed in those early years when I became a 24/7 single dad. It was easier to be their buddy and indulge those little things now and then. The problem, of course, is that “now and then” really became all the time.

Thankfully, I did shift course and began instilling a greater sense of the value of a buck. I did resist their declarations that a particular friend got something they wanted and therefore they should get it too. I learned that being the best parent I could be meant not always being my children’s best friend (see column, Best Friend or Best Parent). My older son is going off to college in the fall. He has a loan from me for ¼ of his college tuition. He will get a budget and he will learn. He plans to get a job so he can buy the extra things he wants – specifically drum equipment – and knows he’s expected to get a job after he’s acclimated to his new school/environment, by the beginning of his second semester.

Being a good parent means expecting good things from our kids. Spoiling them spoils them for life. I’ve been blessed in life to have so many things I’ve wanted, to see and go to so many amazing places, and to have relative financial independence. I earned it; I didn’t expect it. Now, it’s my kid’s turn…